TV to Mobile Shift: How Pay Per Click Can Grow Your Business Faster

TV to Mobile Shift: How Pay Per Click Can Grow Your Business Faster

When Proctor and Gamble wanted to dominate the world of FMCGs, they did not have to look too far to devise a way to market their products. Then, the T.V just became mainstream and mass media was the fad in the ‘90s. The Al Pacinos and James Bonds glued families to their TV sets while they watched their favorite soaps and movies.

Coca Cola and Pepsi recorded great success from the numerous TV ads that promoted soft drinks. Using celebrity influencers such as movie stars, footballers, and artists, they captured the attention of a mammoth of audience with little ease.

Years later, when the computer revolution started in America, no one could have predicted the massive transformation that has led to the miniaturization of the PC from tall and  heavy IBMs to little lightweight IPods that can be slipped into your pocket.

When an industry is to be upended by new technology, it often happens gradually. Advertisers continued to leverage newspapers, TV and Radio ads as the predominant platforms for marketing new products.

The invention of the computer did not bring much hope for advertisers until the advent of search engines and social networks. Even at that, it took some years for Google, Yahoo, and Facebook to consider online ad placement as a serious source of revenue.

As more people flocked to social networks, the prospects for online ads began to materialize.

Online marketers could now display images and text ads detailing products that could reach out to millions of people.

The network effect that was created by the rapid growth of Facebook served to multiply the potentials in online ads. Advertisers could now reach people from all over the world with the option of segmenting based on interest and audience category.

Why the World Moved to PPC

Traditional and offline forms of advertisement lacked the key characteristics of targeting users based on their online lifestyle. Newspaper ads are displayed to all readers regardless of age, gender, location or language.

With online ads, marketers could target users by leveraging the massive amount of data at their disposal. These data are collected via browser cookies, which assigns unique IDs to users when they surf the web; online forms are also used. When you register as a new user on Facebook, you give Facebook a lot of information about you. Your age, gender, location, language and even marital status are collected. It is with this huge volume of data that advertisers are able to target users with such drone precision.

How to Use PPC for Your Business

PPC advertisement leverages the millions of websites we have on the internet to push advertising via Images, videos,  and texts. Since most people now spend an average of 5 hours daily on their smartphones, targeting them based on their mobile usage pattern has proven to be an effective method advertisers use to sell products.

Let us say I love fashion, as a fashion enthusiast, I want to learn about the latest lines of lipsticks, Yeezy footwears and designer favorites of top models. I can get these faster by using  Google to search for keywords like “Mac Lipstick”, “Yeezy by Kanye” or by visiting Kim Kardashian’s website. Google’s learning algorithm can predict that I must be searching to buy, know more or learn how to use these products. These critical moments, essentially called micro-moments are important for advertisers and brands as it is important that they provide users with information that resonates with their brands.

How Do I Bid or Pay?

Payment  is often per click or per impressions. This is known as CPC or CPM bidding. Other payment methods include CPA (cost per acquisition), CPV (cost per view) and CPI (Cost per install).

Your ads will show to over 2 Billion users on Facebook, 1 Billion |+ users on the Google network and millions of third party sites. In short, you can reach out to the whole world if you want to.

Online ads are either text,video or image.

This is the most basic form of PPC advertisement. Whenever you search for a product or service on a search engine website like Google, the Search engine algorithm returns results of ads about products, services, and ideas related to your search query. 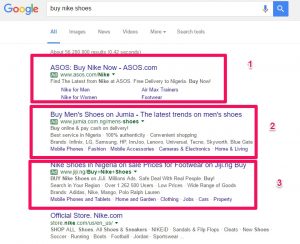 You must have seen those Ads by Jumia and Konga that seem to know everything about you. They follow from one website to the other. They have been configured to display products in line with the things that interest you. isn’t that awesome?

These are predominantly more on YouTube. They can be found in videos (pre-roll, instream), and as a standalone (in-display). Facebook just launched their version of Video ads, which means we will start to see video ads on Facebook.  There are other advertising platforms such as Eskimi, Criteo, and Adroll. 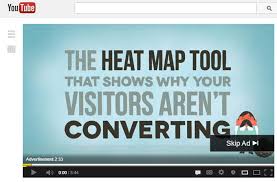 These can also be considered when you want to setup a PPC campaign. The downside being their lower reach compared to giants like Google  and Facebook.

Most PPC ads are managed by skilled advertisers who are versed in the workings of ad platforms such as Google Adwords, Twitter,  Bing, and Facebook.

These social engines also  provide  customer support however, it is best to partner with an ad agency  when you want to use PPC ads to grow your business.

In the future, PPC ads will contribute a larger percentage of global advertising spend as more people embrace the internet and expand the reach of  online ad platforms.

Always ready for an adventure.